Bitcoin – An Introduction to Indian Investors

What is a Bitcoin

Bitcoin was introduced on 31 October 2008 by an unknown group or a person named as “Satoshi Nakamoto”. It is basically a   digital crypto currency asset designed to work as a medium of exchange using cryptography to secure the transactions and to control the creation of additional units of the currency. The identity of Nakamoto is not confirmed yet. The bitcoin transactions take place between users directly, without an intermediary. These transactions are verified by network nodes and recorded in a public distributed ledger called the blockchain. Since the system works without a central repository or single administrator, it is categorized as a decentralized virtual currency.

Bitcoins are created as a reward in a competition in which users offer their computing power to verify and record bitcoin transactions into the blockchain. This activity is referred to as mining and successful miners are rewarded with transaction fees and newly created bitcoins.Bitcoins can be exchanged for other currencies, products, and services though bitcoin users are not protected by refund rights.

What is Bitcoin Mining

Bitcoin follows a competitive mining scheme, based on a hash-puzzle. The miners have to compete with one another, using the computing resources at their disposal, to append a new block to the blockchain ledger. Bitcoin employs a smart incentive mechanism to ensure honesty of the miners, as well as to regulate the influx of Bitcoins in the market. To further regulate the flow of Bitcoins, the hash-puzzle in designed in such a way that new Bitcoin blocks are created (mined) every 10 minutes, on an average. The mining competition based on the hash-puzzle is also known as a proof-of-work strategy for consensus.

Consensus: Bitcoin follows a standard majority consensus, where each miner may choose which block in the chain to append to, and eventually the longest chain sustains. It is widely believed that as long as honest parties control majority of the computing power, the longest chain will grow and outperform other forks.

Can I purchase Bitcoin?

The answer is yes. Bitcoins can be purchased from different bitcoin currency exchange networks online. These networks allow users to buy and sell Bitcoins from their chosen form of currency including INR, USD, and Euros. In India, you can purchase BTC currency from following exchanges.
Through these websites you can easily buy bitcoin with INR from any online banking or through NEFT/RTGS. Selling bitcoin is just as easy, you will receive INR directly into your bank account. All banks that have IFSC are mostly supported.

Why RBI warned the usage of Bitcoin in India

In 2013, RBI warned the usage of all virtual currencies including Bitcoin siting below reasons and clearly stated that Bitcoins are not safe.
The creation, trading or usage of VCs including Bitcoins, litecoins, bbqcoins, dogecoins etc as a medium for payment are not authorised by any central bank or monetary authority. No regulatory approvals, registration or authorisation is stated to have been obtained by the entities concerned for carrying on such activities. As such, they may pose several risks to their users, including the following:

Is buying Bitcoin legal in India?

Though RBI was issued sereral warnings, Bitcoin transactions are not illegal. Bitcoin is totally legal to buy in India under existing laws of Indian Government, but the risk involved is high.

In the recent press release, Reserve Bank of India advises that it has not given any licence / authorisation to any entity / company to operate such schemes or deal with Bitcoin or any virtual currency. As such, any user, holder, investor, trader, etc. dealing with Virtual Currencies will be doing so at their own risk

In Jan 2017, RBI’s research arm, Institute for Development and Research in Banking Technology (IDRBT) has completed the first ever end-to-end test of the technology behind Bitcoin in a project involving regulators, banks, financial institutions and clearing houses. IDRBT conducted the project using the technology behind Bitcoin in a trade application with banks and the National Payments Corporation of India (NPCI).

IDRBT released a white paper titled, ‘Applications of blockchain technology to banking and financial sector in India’.  The white paper concluded that the overall proof of concept provided a good demonstration of the use-cases and helped broaden the understanding of the technology and its potential to other real-life applications.

The technology partner for the project was New York-based MonetaGo, which provided the actual platform for test cases including payments with its proprietary enhanced information payments system (EIPS) and trade finance. MonetaGo said that the project was believed to be the first ever end-to-end test of blockchain using existing banking protocols, including regulators, banks, financial institutions and clearing houses.

As shown in the below graph, Bitcoin has given 150% returns in the last year. So, planning to try your luck..huh..?😋 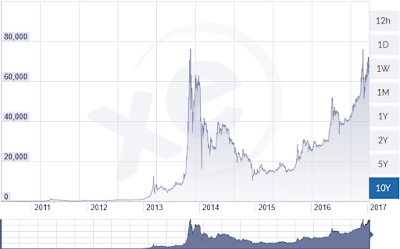 3 thoughts on “Bitcoin – An Introduction to Indian Investors”