Many of the blockchain startups have chosen Ethereum smart contracts and similar platforms as the blockchain environment for new projects and ideas. The startups can issue a token on top of its underlying blockchain which would act as a store of value. The process of issuing coin is simply termed as initial coin offerings.

What is a Token Sale?

A token sale is almost similar to IPOs in stock market. The main difference is there is no regulatory bodies to control the amount of money (in the form of Ethereum or any other altcoins) collected. Below are the sequential steps during the birth of a token

1. A team comes up with a white paper about their idea which can be implemented using blockchain technology. They decide the amount to be collected and opens a crowd sale window.

2. As an investor, if you are interested in the project, you can send them coin (mostly Ethereum) to the address mentioned.

3. Project team will allocate a fixed amount of their token (called as usage token) which will be listed to exchanges within a week’s time

Below given are some successful ICOs came into market and give handsome gain to investors. The ranking is not based on returns, but these are random picks.

Lunyr is an Ethereum based decentralized crowd sourced encyclopedia which rewards users with ERC20 Token named LUN for peer-reviewing and contributing information. Long-term vision of Lunyr team is to develop a knowledge base API that developers can use to create next generation decentralized applications in Augmented Reality, Artificial Intelligence, Virtual Reality etc.

Cofound.it is a self-sustained business consultancy, focusing on carefully-selected startup projects. Their ultimate goal is to build a platform where hundreds of thousands of the best startups go to expand their potential and find investment. Cofound.it aims to create a platform where experts with proven track records offer their expertise and get benefited in the form of Cofound’s coin.

Matchpool is a decentralized matchmaking protocol which uses group dynamics to help participants match with each other. It can also be used as a generic platform for any kind of paid membership community which can clearly define two sides of an interaction or market. Their token name is Guppy.

Basic Attention Token is intended to improve the efficiency of digital advertising by creating a new token that can be exchanged between  publishers, advertisers, and users. The token can be used to obtain a variety of advertising and attention-based services on this platform. Creator of JavaScript and the co-founder of Mozilla and Firefox are behind this token.

Patientory is a patient-centered enterprise solution designed to eliminate many of the pain points in the current centralized healthcare environments and allows Health IT infrastructures to cope with the changing trends in Healthcare management. It uses Ethereum blockchain technology to ensure end-to-end encryption while adhering to regulatory guidelines and compliance requirements.

Etheroll, Augur, Golem are other ERC token which gave huge returns for investors. By this year end, the total ICO money gathered would go beyond USD 1.5 Billion or even more than that it seems. People are going crazy that even a cryptotoken called “Useless Ethereum Token” raised over $40,000 in just under three days time frame.

1. All great ideas started with small capital invested and later backed up by venture capitalists who pump money in large scale. In ICO world, the story is diffrent. You can be part of a great idea by even sending 0.5 ether (approx $150)

2. Investing in a company or idea become so easy and can be completed in few clicks. There is zero paper work involved.

3. An ICO can change your life!!. See the below statistics of the most successful ICOs till now

Many of the ICO’s hitting markets are having white papers which are yet to be proved. The value of token issued will become “real” only when the underlying smart contract start using it. The main purpose of the ERC tokens of an ICO is to act as a store of value for that platform.

But as of now many of the ideas are still in development phase and have to prove themselves for establishing as a long term player. If the platform does not exist or it is not being actively utilized by decentralized applications, these tokens would become mere speculative measures and would eventually fail.

“Yes, there is a bubble factor and there will be many tears along the way as the market matures and we go through the natural cycle of greed, fear, and poor risk assessment”~ Daniel Santos, CEO Token Advisors 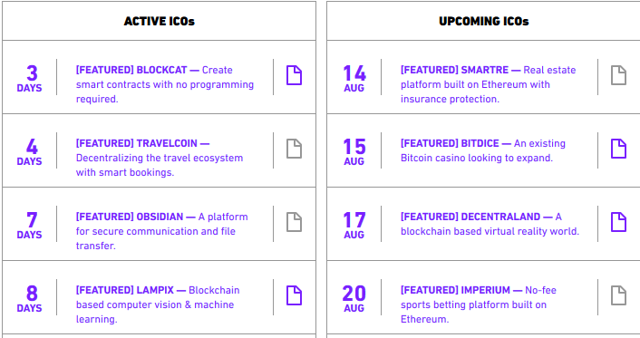 I would not prefer to put a generalized tag as all ICOs are bubbles in making. There could be some sure shot winning ideas. The real task is to identify those startup ideas and invest a small sum which we can afford to lose.

We should keep in mind that there is always a possibility of token reaching zero value due to business or technical reasons and there is no legal entity to cover our rights as an investor. Having said that I feel ICOs are the most modern idea of making a small investor a Venture Capitalist with a small minimum sum of even $100.