On 10 July 2014, after accumulating the required quantity for his PMS, Porinju Veliyath published the research report on Force Motors. The report showcased the cheap valuations of Force Motors at the price of Rs.475 and potential upside it can have in the near future. Also on July 11, he tweeted that Force Motors is a compelling by at then price of Rs. 445. 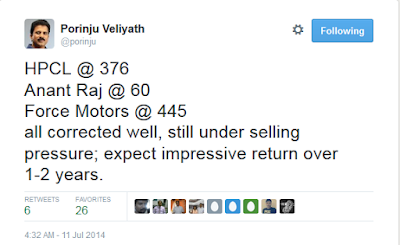 Below are the reasons given in the research report

New Chennai Plant for BMW
Company has inaugurated a new plant near Chennai this month exclusively for assembling engines for BMW and has invested Rs 200 crore for the same. The new plant has capacity to assemble 20,000 engines per year. This is a very unique situation because there is no company currently in the world who is producing engines for both BMW and Mercedes.

Next Eicher Motors in Making??
On July 24th, CA Rudramurthy BV at Vachana Investments gave a buy call by saying  Force Motors is a company which has a return of equity close to 20-25 percent and return of investment close to 40 percent, a profit growth of about 40 percent which makes it a wonderful buy on valuations. He confirms that  Force Motors is a stock which can further move up from current level and it is good to bet on the winning horses than on something which is not doing good.

Recent numbers indicate the luxury car market in India has grown eight times over the last seven years. An estimated 33,000 units were sold in India in 2014 – a steep rise from just 4,000 units sold in 2007. The growth rate could continue for another seven years as the ranks of the nation’s wealthy continue to swell. Also, experts believe that the luxury car sales could cross the 100,000 mark by 2020. If this growth figure can be achieved, then sky is the limit to Force Motors. Who knows Force Motors will be trading at 20K in 2020!!!

5 Bagger for Porinju Veliyath in Just 1 Year
Today, after one year, Force Motors closed at Rs. 2317 and  Porinju Porinju Veliyath has tweeted proudly that Force Motors has the highest percentage of allocation in his PMS. He has just shared his happiness for having a 5 bagger in just one year time frame. 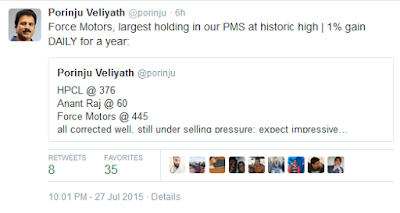