One of our fellow readers, Mr. Saurin Patel has asked the big question in mind of many others. “Every stock going up and up..Is this like 2000/2007 bubble in midcap/small??”. Yes..The mid-cap index is once again running ahead of the benchmark nifty index. Currently mid-cap index is trading at its life time high levels and its performing exorbitantly better when compared to nifty index. Now the worrying factor is whenever this happened for a long-stretch, the market corrected subsequently. Experts are pointing out the examples in 2008 and 2010. 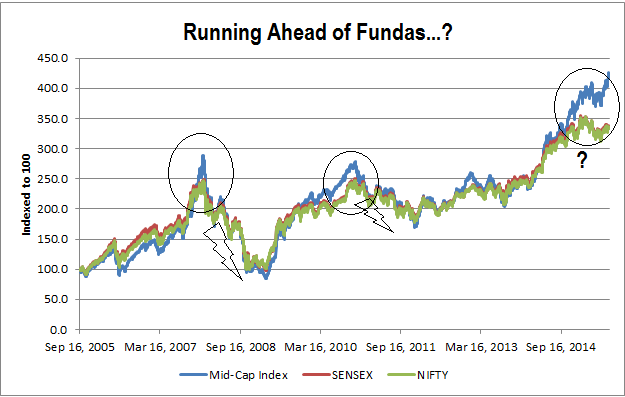 What Data Shows?
The BSE Mid-cap index has outperformed the BSE Sensex by around 26 per cent since April 2014, the biggest and longest period of out-performance since the midcap index data became available in 2005. The mid-cap index is up 58 per cent since the April 2014 against 25 per cent appreciation in the Sensex and 27 per cent rally in Nifty during the period.

What Happened in 2008?
In 2007-08, the mid-cap index had out-performed Sensex by 16.5 per cent in run-up to the market crash of January 2008. The mid-cap index had gained 24.3 per cent in 50 trading sessions ending January 7, 2008. In comparison, Sensex had appreciated by only 5.7 per cent during the period while NSE Nifty was up 6.3 per cent during the period when market began to correct thereafter.


What Will Happen This Time – Bearish Views By Experts
Dhananjay Sinha, head institutional equity, Emkay Global Financial Service is keeping the view that since FIIs are not participating, this rally may slip into negative zone. “Its always tough to justify a rally if the foreign investors turn bearish. FII flows is smart money as they try to pre-empt events. In contrast, the domestic flows have always been cyclical and investors try to ride the market momentum,”

What Will Happen This Time – Bullish Views By Experts
Prabhat Awasthi, managing director & head of equity, Nomura India says that there isno point in comparing with 2008 fall as it was due to global economic meltdown.  “When you look at periods like 2008, midcap valuations had run high. But the subsequent fall was on account of the global economic collapse in 2008. So it may not be appropriate to draw a conclusion based on such events. When it comes to such issues, one has to consider if there is too much leverage or too much speculation. I don’t think it would be fair to say that either is true at this point in time. If there is a correction this time around, it is likely to be technical”.

What Technical Says – Short Term View
According to Nifty Charts,a head and shoulder reversal pattern is being evolved. See the chart below. There are many political and economic short term reasons as well to support the same. 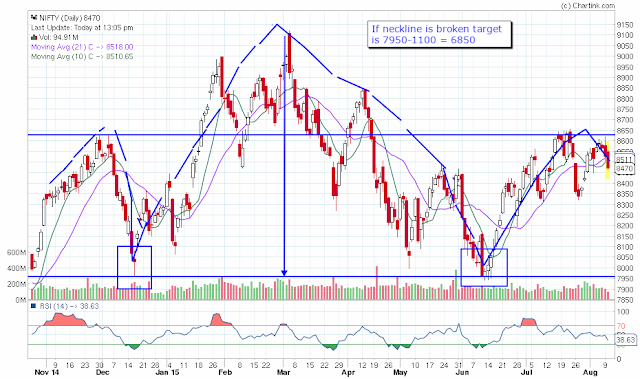 What Should We Do?
As we always share with our readers, please stick to fundamentals. As Warren Buffet pointed – Only when the tide goes out do you discover who’s been swimming naked. Yes the tide is running high now..But lets try not be be part of naked stories!!