Porinju Veliyath, the head of  Equity Intelligence is a person who is followed by thousands of retail investors. In the last 2-3 years he has picked up many undervalued stocks and made excellent profit to his customers. He has many twitter followers who simply try to imitate his picks and make quick bucks. Many of them have indeed succeeded as well. 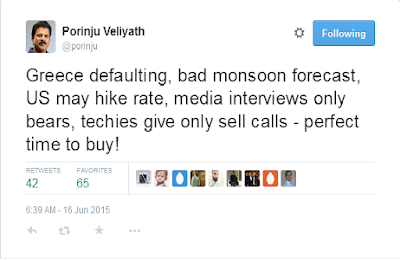 In June 16, when nifty was trading near 8000, Porinju Veliyath gave a buy call and smashed all technical analysts by posting above twitter message.

On June 22, When market recovered 200 points, he proclaimed that Nifty will never touch 8000 for the decades to come!!!.

It seems like an innocent statement, but just because of that one liner, many retailers who were waiting for correction would have jumped to grab the losing opportunity in Indian stock market. A person who was always emphasizing  about value buying forgot to think about the exorbitant valuations in Indian stock markets, especially in mid caps as a whole.

Our humble advise to Mr. Porinju Veliyath is, You are no more just an investor, but a great Indian investor who is followed and imitated (knowingly or unknowingly) by many retailers. A single tweet by you can be a deciding factor for many retail investor’s buying or selling ideas.  Just have this thought in mind while you are tweeting!!

We are winding up this post by pasting a real story mentioned in the investment bible – The Intelligent Investor written by Benjamin Graham.

“In mid-1999, after earning a 117.3% return in just the first five months of the year, Monument Internet Fund portfolio manager Alexander Cheung predicted that his fund would gain 50% a year over the next three to five years and an annual average of 35% “over the next 20 years.” Cheung was predicting that his fund would turn $10,000 into more than $4 million over the same length of time. Instead of regarding Cheung as ridiculously overoptimistic, investors threw money at him, flinging more than $100 million into his fund over the next year. A $10,000 investment in the Monument Internet Fund in May 1999 would have shrunk to roughly $2,000 by year-end 2002″. – Commentary On Introduction

Meanwhile, on August 10th, when all experts where talking about how to celebrate nifty @ 10000, we warned our readers about the possible correction that is about to happen in near term – Kindly read here

On August 16th, we started a separate session itself to point out the high PE on nifty as the valuations are just unmatched with the underlying market conditions

2 thoughts on “Porinju Veliyath Has Just Failed in Predicting Nifty”