Fuelled by uncertanities, along with all crypto coins bitcoin and ethereum fell around 20-25% from their all time highs. Crypto currency market cap hit an all time high of nearly $117 Billion in June 12. Not its near to $92 Billion at the time of writing this article.

Bitmain Technologies is the world’s most valuable bitcoin company. It was established to develop and sell the world’s leading bitcoin miners using Bitmain’s ASIC chip technology. On June 14th they come up with a contingency plan against BIP148. Before we go into the details, we should be aware of below terms, atleast the basic idea behind it.

What is a UASF?

UASF stands for User Activated Soft Fork. It’s a mechanism where the activation time of a soft fork occurs on a specified date enforced by full nodes, a concept sometimes referred to as the economic majority. A UASF requires a lot of industry support and coordination, which is good practice for eventual hard forks which requires even more industry coordination.

MASF stands for Miner Activated Soft Fork. It’s a mechanism by which miners trigger activation of soft forks when a majority signals the readiness to upgrade. This allows for a faster activation time for the soft fork, leaving full nodes to upgrade at their leisure. This method is a tradeoff, because it puts trust in the hash power actually enforcing the new rules. If they do not, it can cause various invalid chains on the network.

BIP148 is a UASF that is designed to cause the existing SegWit MASF deployment to cause activation in all existing SegWit capable node software (which currently is 80% of the network nodes). How does BIP148 Work? From August 1st, 2017, miners are required to signal readiness for SegWit by creating blocks with the version bit 1.

This will cause all SegWit ready nodes, which make up over 80% of the network, to activate and begin enforcement. Link for reference: luke.dashjr.org/programs/bitcoin/files/charts/segwit.html. Miners must also check blocks prior to their own and ensure that they also signal for SegWit, and only build on those blocks.

Now Read The Story As Mentioned in Bitmain Post

On May 24th, 2017, a significant economic majority, more than 80% of the entire hashing power and 80% of transactions’ source software or service, of the Bitcoin industry came to an agreement in New York (New York Agreement) on tangible steps to scale Bitcoin in the near future.

Representatives of Bitcoin Core declined the invite to attend this meeting. This agreement is the hard work of those who sincerely believe in Bitcoin and those entrepreneurs or investors who have strong financial interest in scaling Bitcoin quickly and unitedly. Bitmain is a supporter of the agreement. We support the agreement and we want to make it happen as soon as possible.

A software project, btc1, which is addressing the New York Agreement, has been under active development and will likely deliver a consensus rule change plan called SegWit2x. The testnet5 for SegWit2x is already alive. Alpha version of the software will be released on June 16th and everything is still on time.

Despite this agreement, the UASF (BIP148) astroturfing movement continues to get lots of airtime on censored forums, many of which are controlled by single anonymous individuals. Many of the software developers who work in a software project called “Bitcoin Core” are also supporting it. BIP148 poses a significant risk for the Bitcoin ecosystem, so we are preparing a contingency plan to protect the economic activity on the Bitcoin blockchain from this threat.

UASF is an attack against users and enterprises who disagree with activating SegWit right now without a block size increase, which is a very important clause in the Hong Kong agreement made by the global Bitcoin community in February, 2016.

The New York agreement is also continuously and intentionally sabotaged by a group of software developers working on Bitcoin Core.

We must also be prepared for the disruptive risk that UASF activation will bring to the Bitcoin network. The New York agreement is very conservative and aimed at bringing peace within the Bitcoin community on a simple but artificially escalated scaling issue. If somehow the New York agreement cannot prevent a chain split, we will have to be prepared.

What is the protection plan of minors?

This plan is for a User Activated Hard Fork, or UAHF. The activation time is configurable. We will do the hard fork at 12 hours and 20 mins later than UASF. Bitmain ends their blogpost with below statement

We share the same belief with some very early Bitcoiners, that decentralization means that more than 1 billion people in 200 countries are using Bitcoin as a saving currency and payment network, and that it comprises of hundreds of thousands of Bitcoin services, traders, exchanges and software. We do not believe that decentralization means a 1MB block size limit or a responsibility to constrain the block size so that a Raspberry Pi can run a full node while the fee per Bitcoin transaction is higher than the daily income in most developing countries. We believe Bitcoin needs to offer people an alternative to flourish without depending on powerful authorities that charge fees that can be as high as 100$/transaction.

Right after this post, bitcoin started crashing and it just got replicated to other coins as well. See the graph here. So lets wait for the August 1st climax day!! 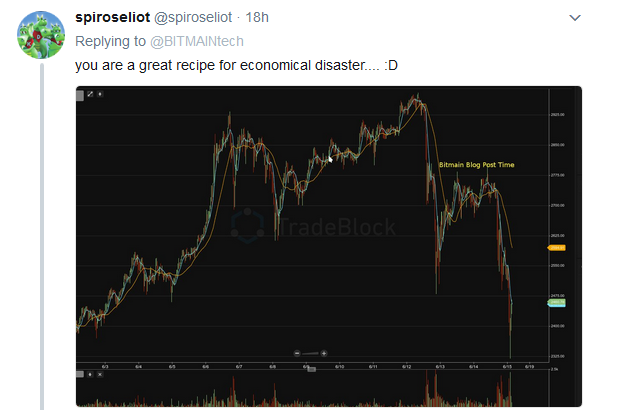